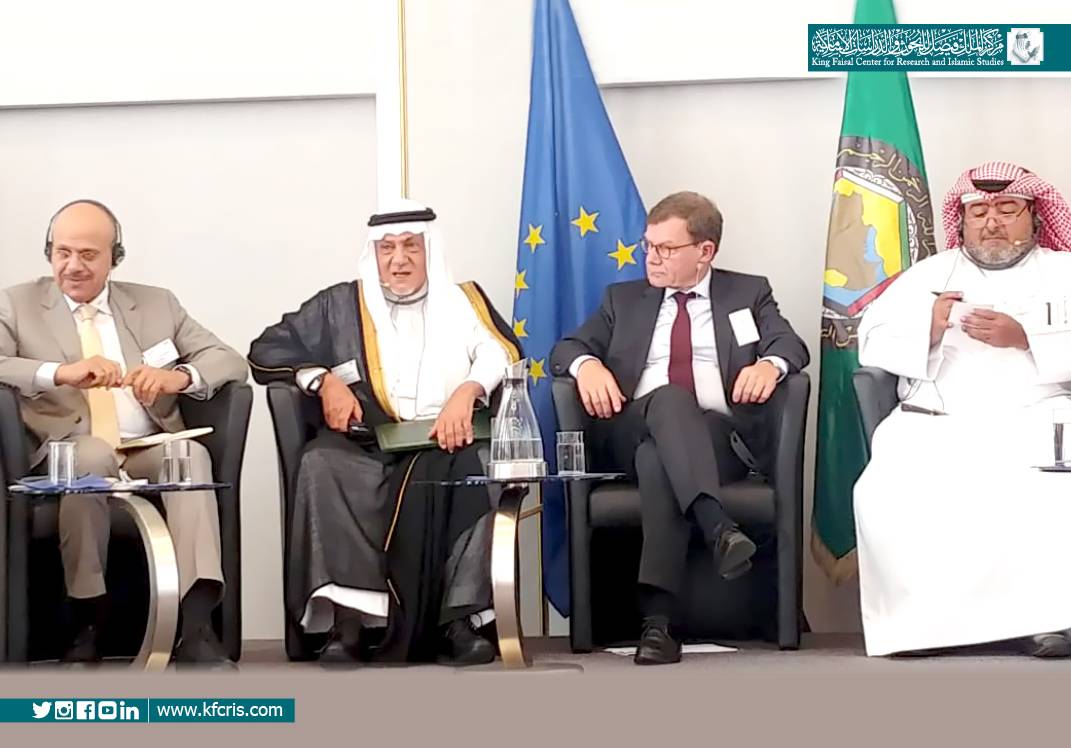 Prince Turki Al-Faisal, Chairman of the King Faisal Center for Research and Islamic Studies, participated in the first Gulf-German dialogue on security and cooperation organized by the Arab-German Friendship Association and The Federal Academy for Security Policy on Thursday, 27 June 2019, in Berlin.

The forum was attended by The Secretary General of the Gulf Cooperation Council Dr.Abdullatif bin Rashid Al-Zayani , Sheikh Thamer Ali Sabah Al-Salem Al-Sabah, Chairman of the National Security Agency of Kuwait, together with German personalities and deputies from the German Bundestag. alongside participation of group experts, thinkers and a number of researchers, from both the Gulf and Germany.

The forum discussed several topics such as the historical framework of the German-Gulf relations: strategic partners in promoting peace and stability, and several discussion tables that discussed cooperation in economic relations and foreign relations, as well as cooperation in security and military relations. The forum focused on strengthening Germany's external relations with the GCC by discussing the challenges and opportunities to manage and resolve regional conflicts, particularly with regard to the war in Yemen.

Al-Faisal delivered a speech at the opening session of the forum, in which he expressed his thanks and appreciation for the efforts made to hold this forum by the Arab-German Friendship Association and the Federal Academy for Security Policy.

He said the US invasion of Iraq in 2003, the ongoing Syrian revolution and the war for Yemen had exacerbated sectarian divisions, all of which were political. Suggesting that sectarian conflicts in the Middle East should not be described religiously or ideologically because we know well that these conflicts have nothing to do with Islam, stressing that Iran and the Iranian revolution is based on sectarianism tension in the region, where divisions are openly promoted by the Da’wa Party and some politicians who promote pro-Iranian policies. The Iranian role in Syria led to the strengthening of regional sectarian factions, and Damascus encouraged religious militias to emerge and flourish, widening the cycle of violence, with no political solution on the horizon.

In his speech, and in order to overcome sectarianism, Al-Faisal stressed the importance of focusing on the cultural, economic and political reasons, especially the strategic geography of resolving differences. He said Arabs and Persians were all Muslims, but Saudi Arabia and its partners could not tolerate Iranian interference in their internal affairs and could not tolerate the actions of Iranian armed militias or loyal armed groups in spreading havoc throughout the region. Iran's latest provocative attack on navigation in the Gulf and the Strait of Hormuz has made the region close to conflict, which in the event of this would make everyone a victim.

On the second challenge, which is the absence of justice, Al-Faisal questioned the containment of the injustice embodied by the Palestinian cause, which has been a major concern for nearly a century, stressing the continued importance of the Palestinian cause. King Salman bin Abdul Aziz, the leader of the Gulf Cooperation Council, the League of Arab States and the Organization of Islamic Cooperation condemned the "illegal and irresponsible decision" to recognize Jerusalem as the capital of Israel, a "serious violation of international law and international legitimacy." The Arab and Muslim leaders reaffirmed their commitment to the Palestinian quest for statehood and stressed the reasons why this is the main Arab and Islamic issue.

He called upon allies and partners around the world to redouble their efforts to bring a lasting solution to this justice-based conflict. In particular, European States were in an ideal position to work towards that goal. He pointed out that the recent American offer to improve the economic situation of Palestine is impressive for what it contains, but it is similar to the body that includes all the organs, heart, liver, kidneys, digestive system, arms and legs, but the most important member is the head is missing; this head is an independent and sovereign Palestinian state with Jerusalem as its capital Eastern.

In his speech, Al-Faisal addressed the third challenge: the increasing role of regional power. Pointing to the need to build a new security structure under the current circumstances, recalling that the Middle East as a multi-polar system, led by the full regional power today: Saudi Arabia, Egypt, Israel, Iran and Turkey. We will therefore need to find practical solutions to end the confrontations. We cannot tolerate more tensions and we do not want to increase competition. Saudi Arabia does not interfere in the internal affairs of other States and expects reciprocity.

In conclusion, Al-Faisal stressed the need to enhance stability and ensure security through the values ​​of States in their tasks and their hoped-for role, calling for avoiding trade wars on goods and commodities and breaking the deadlock between the leading world power specifically to ease trade and economic tensions. Such harmony would end the continuing trade tension between States.

He stressed that the Arab world in general and the Gulf states in particular are ready to assume their responsibilities. Saudi Arabia and its Gulf Cooperation Council allies are fully aware of the needs of empowering young people, empowering minds to lead the digital revolution, and aspiring to introduce evolutionary rather than revolutionary changes to preserve our values ​​and serve humanity as best we can. Adding that the Arab world is an inseparable part of the "West," because what unites us far more than divides us. The three monotheistic religions, Judaism, Christianity and Islam, emerged from the same geographical area. One can safely say that the Arabs have introduced Greek philosophy to the West and that "Western" civilization is in fact "Oriental", since its origins lie in our region of this world. So, the 21st century requires Arabs and Europeans to work together, if not for any other reason than to save what can be in our civilizations. "We need to combine our strengths and make up for each other's weaknesses ... We need to become full partners in the search for peace and stability, the Middle East is not a place of instability, Europe is not a battleground, we need some of us to address, to resolve the remaining grievances and to meet the challenges of regional powers that threaten global security and stability, all of which are feasible, but require the will to act as genuine partners. "