Change at the Top: The Reasons, and Consequences of, Hossein Salami’s Elevation to Commander in Chief of the Islamic Revolutionary Guard Corps 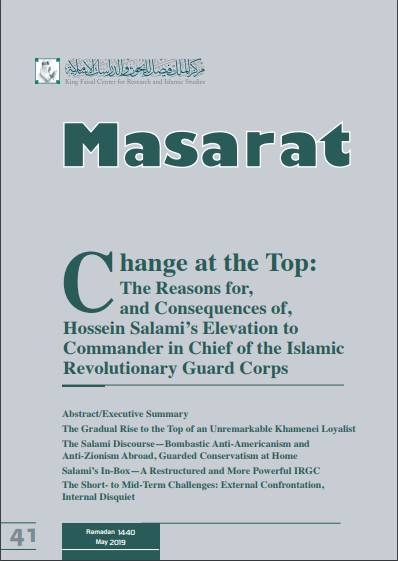 On 21 April 2019, the Supreme Leader Ali Khamenei announced the replacement of the commander in chief of the Islamic Revolutionary Guards Corps (IRGC), Aziz Jafari, with his deputy, Hossein Salami. This move caps an ongoing process of regeneration within the top echelons of the IRGC which has been ongoing since early 2017.

The decision to replace Jafari was due, but not entirely expected so soon after the White House designation of the IRGC as a terrorist group. Since 1997, Khamenei had placed an informal ten-year limit on the commandership of the IRGC. Aziz Jafari was therefore due to be replaced by 2017, but he had announced a three-year extension in the summer of that year. His replacement in April 2019 was therefore within this extension period. Khamenei is wary of overstepping the 10-year rule in many cases and prepares these kinds of replacements methodically, in order to bring into effect a seamless transition. This holds particularly for the head of the Judiciary, who is also on a 10-year rota. Sadegh Larijani was recently replaced by another close acolyte of Khamenei, Ebrahim Raisi.

The choice of Hossein Salami was not, however, an automatic or obvious one. In choosing Salami over several more prominent officers, Khamenei has chosen to continue to enact the gradual and discreet generational change which has been in place across the Islamic Republic’s institutional framework in the past few months, which has resulted in figures who rose to prominence during his own Leadership (following 1989) and who are distinguished by a rigid loyalty to himself, rather than a ‘transferred’ loyalty from Khomeini to himself, progressively taking over key posts. Salami is also likely to have been seen as a better fit vis-à-vis the short and mid-term challenges that the IRGC is facing in the wake of the White House’s designation of the Corps as a terrorist organisation, due to his at times rabid anti-Americanism and anti-Israeli public remarks, and his stated preference for an aggressive, rather than defensive posture towards such opponents of the Islamic Republic. His selection is probably designed to send the message that, at least in the rhetorical realm, the IRGC and its mentor Khamenei are unfazed by the recent White House designation and will continue to pursue the Corps’ general objectives within Iran and the Middle Eastern region.