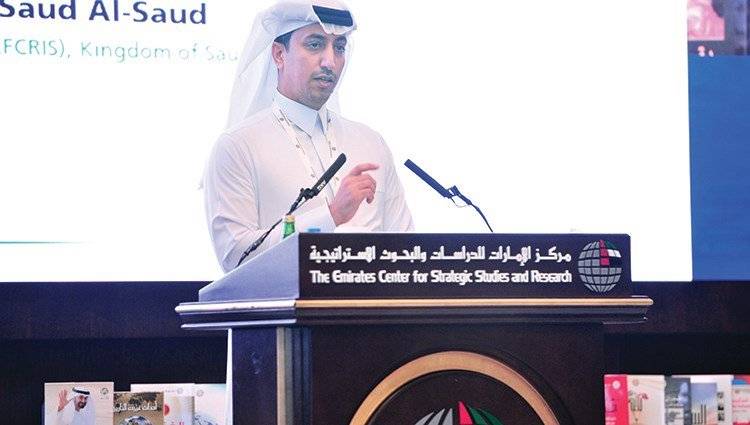 The King Faisal Center for Research and Islamic Studies participated in the seventh edition of the "Storm of Thought Coalition" Forum in Abu Dhabi, organized by the Emirates Center for Strategic Studies and Research, under the title: "The Arab Future in the Era of Technology" from 8 to 9 October 2018.

At the beginning of the activities of the second day of the symposium, the Director of Research Department, Abdullah bin Khalid Al-Saud, the keynote speech focused on the security dimensions of the technology issue. He highlighted the security dimensions of the technology issue through three points: the exploitation of terrorist organizations for cyberspace and social networking sites; secondly, the ability of these organizations to innovate in technology, such as the use of drones, and thirdly, the increased risk of cyber terrorism.

In his speech, he explained that terrorist organizations have exploited the technical development of spreading hatred, the culture of violence, recruitment and spreading terror, targeting our youth and societies as victims in order to spread destruction and corruption on the ground.

He pointed out that one of the most important characteristics of terrorist organizations is that they are fast-adjusting, durable and transformative. This is evidenced by their mobility among electronic applications according to the level of encryption and protection enjoyed by such applications. Terrorist organizations seek information and media propaganda through the means of communication.

He added that cyber terrorism in the future may be no less dangerous than weapons of mass destruction if it leads to the breakdown of atomic stations to generate electricity, because of the huge disasters caused by transport and other infrastructure.

In conclusion, he said: The reality of the governments and peoples of the world and the Arab region, and our outlook for the future, requires more social awareness and firm government policies. There is no doubt that the most important and best thing to start with is the component of society, in which parents, media institutions and education play an important role that requires mutual attention and support in terms of awareness and dissemination of sound values ​​and concepts.

At the governmental level, several recommendations were made, notably: attention to the legislative environment and the enactment of strict laws on the negative uses of technology, particularly those that damage national security, such as the manufacture and acquisition of UAVs or the possible technology of their manufacture, is a necessity. As well as the organization of new media laws and concepts of social networks and ways of employment. He pointed out that it is important to take into account the dark side of the technological revolution, especially as we are approaching the age of artificial intelligence and the revolution of biotechnology, stressing the importance of the human element, especially in the use of technologies in the military and security fields, in order to promote the principles of responsibility and transparency.

Recommendations include: Building partnerships with global technology companies responsible for websites and global search engines such as Twitter, Facebook, YouTube, Telegram, Google. As well as those manufactured for modern technology to find mechanisms to control and ensure the non-exploitation of the objectives of threatening the security of people and countries, and the development of specialized government agencies to combat cybercrime, and to build national strategies specialized in cybersecurity to protect the infrastructure. The exchange of scientific and practical experiences and benefiting from successful experiences in this field is one of the most important priorities that we must focus on in the Arab world.