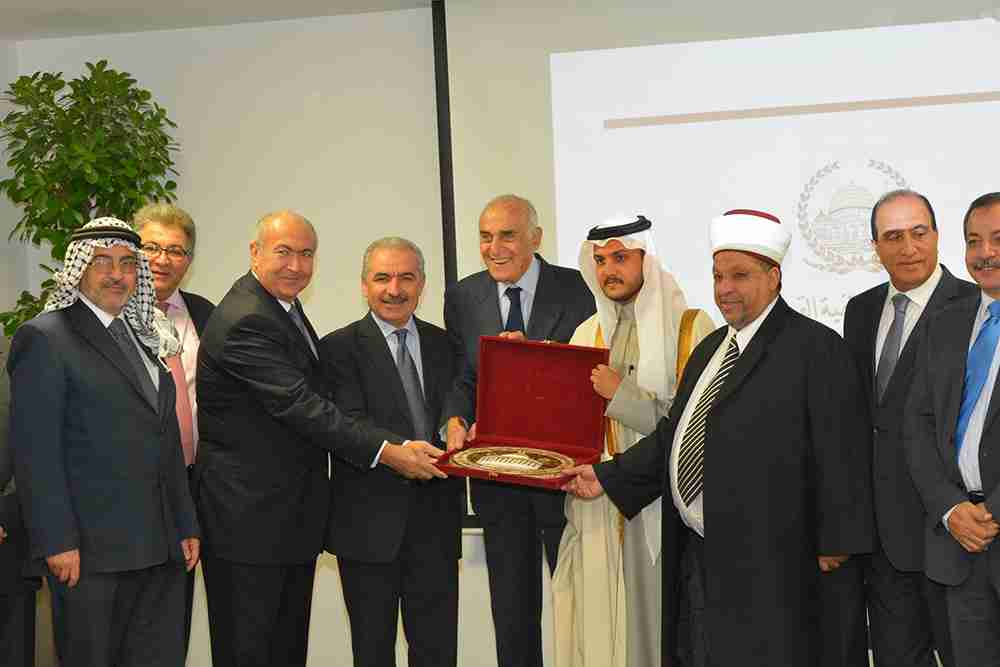 Under the patronage of His Royal Highness Prince Turki Al-Faisal, Chairman of King Faisal Center for Research and Islamic Studies, and in the presence of His Royal Highness Prince Saud bin Turki al-Faisal, Advisor to the Chairman of the Board, a joint meeting of the board of trustees and management for Alquds Fund and Endowment was held at Al-Faisal Institute for Human Resources Development Training Hall in Riyadh on Wednesday morning, 22 March 1438/ 21 December 2016. The meeting was held to discuss ways to support Alquds, and to strengthen the steadfastness of its people in the face of Judaization occupation programs.

His Highness Prince Saud bin Turki conveyed greetings from his father, Prince Turki al-Faisal to the guests, and welcomed them to the Kingdom expressing his pride and honor in hosting the support meetings at King Faisal Center for Research and Islamic Studies. Dr. Saud bin Saleh Al-Sarhan, Secretary General of the Center, also welcomed the attendees at the beginning of the meeting, saying the issue of Alquds is central to the Islamic nation.

In a good gesture, Mr. Rashid Al-Masri – Chairman of the Board of Alquds Fund and Endowment requested a moment of silence at the beginning of his speech for the martyr of Alquds, King Faisal bin Abdul Aziz, and the martyrs of Palestine. Al-Masri also conveyed his gratitude to the Kingdom of prosperity and belonging that represents the Custodian of the Two Holy Mosques, and his thanks the Saudi people on their continued support of Palestine and Alquds. Mr. Al-Masri spoke of the daily suffering and serious threats to the people of Alquds, pressing the Arab and Islamic world to provide moral and material support for the Holy city.

Assistant Secretary General to the Organization of Islamic Cooperation, Mr. Samir Bakr, stressed that the organization was established to support the issue of Alquds, which stands at the top of its priorities, emphasizing the keenness of the organization to provide support to strengthen the resilience of Alquds.

Dr. Mohammad Shtayyeh, Representative of Palestinian President Mahmoud Abbas, conveyed the greetings of the president to those present, confirming the close relations and brotherly strategies between Saudi Arabia and the State of Palestine, and that the Kingdom is the largest and cardinal supporter of the Palestinian cause, revealing the magnitude of suffering experienced by the city, and ways to implement programs and projects to protect it.

At the end of the meeting, Rashid Al-Masri, Chairman of Alquds Fund and endowment, and His Excellency Sheikh Yusuf al-Dais Palestinian Minister of Awqaf and Religious Affairs, and Prof. Dr. Imad Abu Kishk, President of Alquds University presented a commemorative gift to His Royal Highness Prince Turki al-Faisal, for his efforts in the Fund’s Board and his support of the Palestinian cause.